The U-Sentry is a Tier 3 ship in the U-Series mod. It has two front cannons which each fires a pulse each rapidly with high recoil, allowing it to escape easily, similar to the vanilla ship, the Shadow X-3. The agility is miserable un-maxed and is still quite bad maxed, but the ship can deal a great amount of damage from range, and it is actually quite excellent against Tier 7's if used properly. However, this has the same shield cap as a standard U-Sniper (and U-Sniper MK 2 when maxed), with worse shield regen, so be careful when using this glass cannon. Despite its appearance, it does not shoot 6 bullets at once, just two very rapidly.

Two or three U-Sentries, if they are skilled and working together, can usually kill an entire team and destroy their base early in the game. Just one U-Sentry can destroy a Lvl 1 station module on its own, if the enemy's defence is poor. 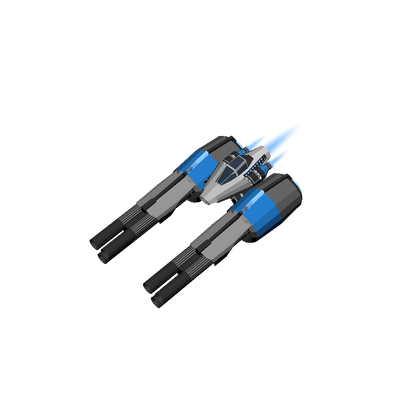 The H-Warrior does more damage and has lasers behind it to help it escape, but it does not fire as many shots as the U-Sentry and cannot reach the U-Siege.