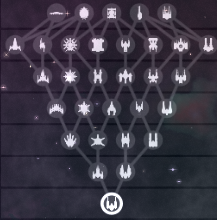 U-Series is a modded version of Team Mode developed by Finalizer. The U-Series is an entire ship tree based off of the Vanilla mode Tier 5 U-Sniper ship model. Currently the most popular mod in Modding Space, U-Series gameplay is incredibly fast-paced, strategic, and intense, with rounds lasting an average of 30 minutes (some rounds are 10 minutes long, and some are 45 or even 60). The maps in this game mode are handpicked by Finalizer, with most being high density, leaving just a handful of sparse maps.

Just like in vanilla mode, ship upgrades are very steep and are even more steep at the higher levels. A maxed U-Quad (tier 2) can one-shot an unupgraded U-Monitor or U-Afterburn (tier 6), similar to how a maxed Pulse-Fighter (tier 3) can easily kill unupgraded tier 6 ships in vanilla, but faster. As another example, the Scorpion and Condor shield upgrades from 225 to 400 (about 1.8x), and the U-Center shield upgrades from 400 to 700 (also around 1.8x).

There are three categories of major play styles (Tier 3-6 ships fall into these categories):

Ships don't necessarily fall completely into a single category above. For example, the U-Arsenal falls into the first and last categories, while the U-Demon falls into the last two categories.

U-Series is a Team Mode based mod:

Healing Lasers- This is a new mechanic added to team mode that changed the way many people played the game! This update made more people think more tactically. This update leads to many players helping teammates by healing them. To heal you need to go to the station depot and click on the option where it says "Healing" when this is done your lasers turn into much more of a fun and laser which shows "+" when you heal a player. The amount the player gets healed by is determined by your ship and its stats. The game mechanic allows players to act more as a group and stops the problem with people flying solo and killing the whole team. Healing gives points in team mode thanks to the October 2019 update. Also the best healer is recognized in a team. The best miner and the best killer will also be recognized.

Gem-Transfer- This is a new mechanic added to team mode that allows players to drop gems for other teammates! This update furthermore allowed players to think as one and to play as one as there is no "I" in TEAM! This mechanic is done by holding "V" which allows you to drop gems by the amount you need to upgrade each stat such as a t3 can only drop 15 gems at a time while a t6 can drop 30 gems! This is a very good strategy in team mode as you can help teammates that need gems so they can upgrade, get gems and help your team get ready for danger and be prepared for opponents. This mechanic added more thought into the games and more fun things to do. Note: Gem transferring does not give points, and you may have to deal with the lazy ass gem stealers in every game. If you want to give to a specific ship, its good to first press Y>F>E. (you, follow, me). This tells them to follow you. lead them to a place with few ships, then give the gems.

Ship Rescues- This was a mechanic added to team mode just before the first Alpha Centauri Wars as a way for players to return to the game on the same team after disconnecting or leaving. If the player leaves the game while in a gem depot they will not lose their ship, credits, secondaries or points. If done outside of a depot, the player still keeps their ship upon their return (assuming the player had extra lives), but it counts as a death.

There are 31 ships in U-Series, according to the scheme of 1-2-4-5-6-8-5. As all ships are based off the U-Sniper, they are all capable of dealing insane amounts of damage but lack shields, making even low tier ships capable of destroying some high tier ships quickly. There are a considerable amount of ships in this mod that use back-firing lasers to propel themselves at insane speeds.