The U-Siege is a Tier 4 ship in the U-Series mod. It has 4 cannons at the front; a dual cannon which fires 2 pulses rapidly and two central cannons stacked on top of each other which both rapidly fire inaccurate, lower damage pulses. Its high energy capacity gives it high burst damage, similar to the Marauder. This ship, along with the U-Arsenal, is recommended for new players since it is widely regarded as severely overpowered.

Skipping the Damage upgrade provides more recoil to help retreat with RCS off. 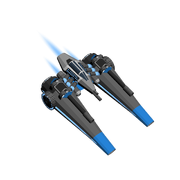