The U-Speeder is a Tier 4 ship in the U-Series mod. It has a dual cannon at the front which fires two pulses and a cannon at the back which rapidly fires a low damage pulse. The back cannon's recoil allows this ship to propel itself forward at insane speeds. However agility is a weakness. it can't make tight turns very well, and is purely and offensive-styled ship. You are recommended to start off upgrading either Ship Speed or Energy Regeneration. Damage doesn't affect the rear cannons, so upgrading it helps to waste less energy when attacking. This ship is surprisingly tanky and is the predecessor to the U-Afterburn.

many that upgraded to this, planned to stay this thing forever and destroy bases, but the U-Afterburn is really better but you've got to pass the Trailblazer first, wich is kinda a trolling ship by ramming your teammates in to astroids, but lacks in mining. 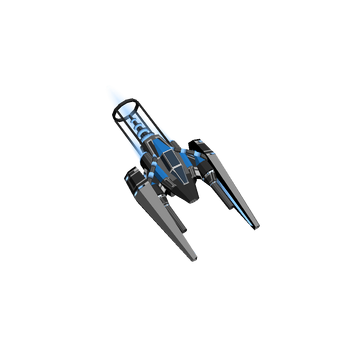 This ship is the reverse of the U-Interceptor, with the 2 more stronger pulses at the front rather than the back and the lesser pulse at the back instead of at the front.