X-Warrior is a Tier 4 ship in Starblast.io. It fires four fast lasers from the front. The ones on the sides move faster than the ones in the center. Despite its size and bulk, it moves at an average speed and has brilliant acceleration, allowing it to get to top speed faster than most ships. It has average shield capacity and shield regeneration, but extremely high shield sensitivity. (ramming an asteroid you will lose a fair amount of shields) It is also incredibly efficient with energy, rarely running out when damage is not maxed. 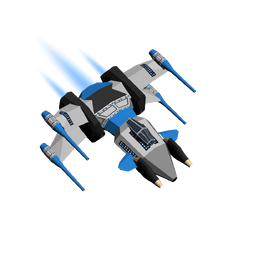 The X-Warrior, although not a popular choice due to the weak shields, is a great ship in team mode. As the fairly good damage and ROF can help it fill up its cargo without the need of ramming into asteroids and quickly draining its shield.

Make sure everything on this ship is maxed, especially shields. This is because strong Tier 3 ships such as Y-Defenders and Pulse-Fighters will target you and probably kill you. When you are maxed, however, they do not stand a chance against you. If one tries to assault you, turn around and start shooting at them and hopefully scare them off or kill them.

The X-Warrior's good mining abilities make it a great ship for team mode. A whole team of X-Warriors at any base level (except Level 1), would be a great miner team. The base will upgrade very fast, try to stay near your base, as stronger enemies may try to kill you. It's a good tactic to stay x-warrior and mine straight through a level 3 base because it will keep the mining speed up because it takes 1000 gems to max a level 5 ship.

If a Crusader or Bat-Defender attacks you, a good strategy is to turn off the RCS and back away from the bulky ship while shooting back. Although the X-Warrior's shields are not very strong, the fired lasers that come towards you won't kill you very quickly, while your reasonable rate of fire will help you take them down easily. Mercuries, as long as they are weaker than you can't do anything against you.

While this strategy works only against noobs, buy 4 mining pods and follow the mining strategy above, but when attacking noobs, the mining pods make you seem more powerful than you are, and it might be hard for opponents to tell which of your bullets will hurt them. The mining pod bullets look similar to the X-Warrior bullets.

Also, be sure to mine some nearby asteroids after you kill the noobs. On their death screen, after they see you destroy an asteroid as fast as a Bastion, they might think you're as powerful as one.

Buy 4 attack pods, making you do 95 DPS, almost as much damage as a Bastion's 100 DPS. With a maxed Fly healer, you'll also have the shield regen of a Bastion.

The X-Warrior is one of the ships inspired by the Stars Wars Universe: